IN WHICH WE MEET ACTUAL PIRATES 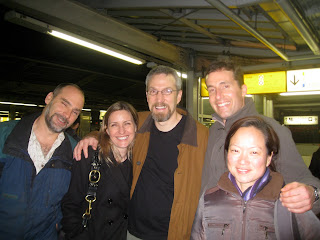 In an effort to shorten the lifespans of our friends, Rob and I occasionally invite them to join us for an evening of heavy drinking and cholesterol.
Seriously, these are really healthy people. They run and bike and eat well. If someone doesn't do something, these people are going to live forever.
That's where Rob and I come in.
Last night, we went out for Brazilian Barbeque. 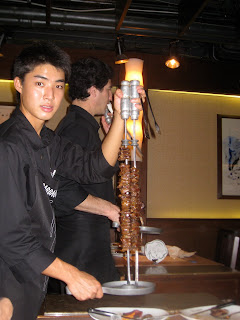 You don't order. You just wait until the meat guys stop by to see if you want them to carve a slice of beef, pork, lamb, sausage, or chicken hearts off their giant skewer. 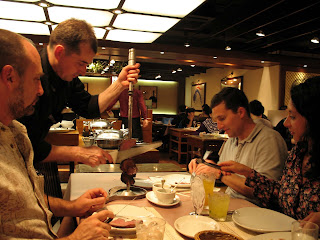 This was taken during that portion of the evening when we were still sober, and therefore civilized.
Luckily, paying a set price for whatever you want to drink for two hours tends to loosen people up.
A lot.
See that green drink in front of Sandy? That's a caipirinha, the national drink of Brazil, made with a sugar cane aclohol called cahaca, sugar and limes.
I think the literal translation of caipirinha is "Where are my pants?"
When we ordered them, the waiter asked, "Are you sure?"
which kind of scared us until we realized he was saying, "Do you want sugar?" I don't know who the hell is ordering these without sugar, but they are a better drinker than I am.
Mark took one drink this concoction and realized that it's about as strong as a shot of lighter fluid, even if you put sugar and limes in the lighter fluid.
He decided to try a Moscow Mule, but it was too fizzy.
So he ordered a gin and tonic.
And a glass of red wine. 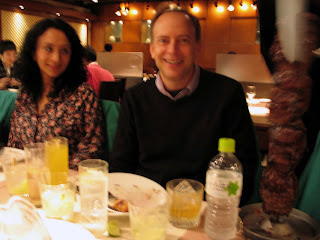 Eventually, we started to worry that the waiter was going to come tell us that the bar needed its glassware back, so we helped Mark drink some of the rejects.
All told, we must have collectively consumed at least one cow and the better part of a pig.
Becky got all misty-eyed and called her dinner "a barnyard on my plate"
because she's a huge animal lover.

It all made Dave wax poetic about a similar restaurant in Kenya.
Granted, I was at the other ended of the table, but I'm pretty sure that story went like this.
Dave: They specialized in gay meat.
Rob and Christina (in unison): How could they tell?
Dave: Tell what?
Rob: Whether or not the cows were gay?
Becky: By their horns.
Dave (ignoring everyone): Eventually, Kenya outlawed hunting, so a lot of gay meat places shut down. 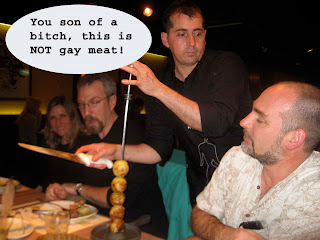 OH...
GAME MEAT!!!
Always on the lookout for special forces, Mark and Becky recognized the guys at the table behind us as members of the Israeli CIA, because everyone knows that the Mossad are crazy for meat. 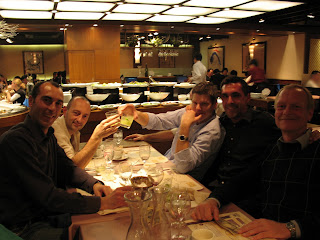 Apparently the Mossad are completely different from the Masai, which cleared things up for me, because these guys were clearly not Masai.
Later, we learned that they aren't Mossad.
They're PIRATES.
How cool is that?
See the one who's trying way too hard to look sexy- that's Chris.
Apparently, he's the hot pirate.
The moustache guy is the elder pirate.
The rest just stand around saying things like "Aye, matey" and "Scurvy made me teeth fall out." 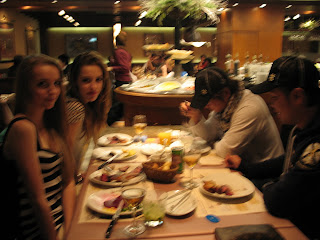 Then the models came in.
Rob told me this morning that he thinks the guys were famous Japanese athletes, so that would explain why everyone else in the restaurant was fascinated by them and why one of them is trying to cover his face with his hat in the picture that I took, which seemed weird at the time because I didn't care at all about having the guys in the picture.
Our table was much more interested in their stick-armed dates.
We took a shot at guessing where the girls were from, and Dave gallantly offered to speak to them in Polish for us,
which would have been extra awesome since Sandy found out that they're from New York.
I still don't know why Sandy had Flat Stanley in her purse, but it just goes to show that mothers really do have one of everything with them at all times.
I guess she told her daughter she'd find  some exotic place where Stanley could be photographed, and it doesn't get more exotic than real live pirates. 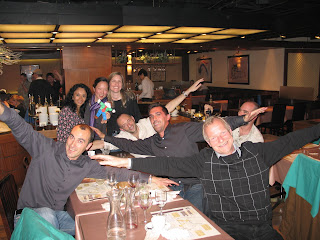 Drunken pirates are really accomodating.
I don't know why Sandy wanted them to hold their arms out like they were flying. It doesn't make sense. They just look like airplanes, not boats.
Years ago, Tracey Ullman did this bit where whe was at a bus stop and no one was talking to each other, so she started singing "The Lion Sleeps Tonight." Strangers bonded as they broke into a choreographed song and dance number.
It was brilliant.
And it totally doesn't work on Japanese trains.
Becky had already attanied seemingly unreachable levels of awesomeness by attempting to orally stimulate the phallic image on her sugar pack. 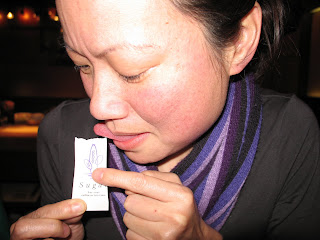 But it was her attempt to engage the 300 people who were literally smashed into our train car in a sing-a-long that secured her position as the reigning Queen of Amazingness.
We did get a couple of drunk guys next to us try to hang with our effort at social unity and breaking the societal boundaries that isolate us.
Everyone else was completely uncooperative, which means that they just aren't interested in promoting social harmony.
I know it wasn't because they didn't know the words, cause how hard is it to just sing "Owem-away" a hundred times?
Next outing, fried food on sticks.
And we'll have to find something even cooler that pirates.
Who am I kidding?
There's nothing cooler than pirates.
Especially pirates that will make plane arms for a picture like they're pretending to be pilots.
Oh, hell...
I guess pilots are pretty cool, too.
Right?
at March 07, 2010