My plan to post every day for 20 days was thwarted twice. Once by an amusement park and again by a stomach bug.

For the last week, Max and Maya were good sports while we did lots of adult activities when guests visited us. My kids made the best of it when Rob went to New Jersey for nine days, leaving the three of us to our own devices. By that I mean the kids watching The Wizards of Waverly Place in one room, while I watched RHONY reruns in the other. (Sorry, I love Bethenny Frankel. She's me times ten.)

Anyway, we decided that the last outing of our vacation should be the closest amusement park. Fantasilandia is possibly the most urban amusement park ever. We actually street parked. For an amusement park. In Santiago, that means a guy with an orange vest and a stick stood guard over our car for 6 hours. This service cost four dollars. In Tokyo, that would have cost a couple hundred dollars.

Anyway, it's a great park if your kids are tall or brave or both. There's not much for tiny tots, but after some initial hesitance, Maya was ready to take on anything she was tall enough to ride. Luckily, she's tall for her age.

We've all taken our kids to the amusement park. We know what that's like. But the difference between doing it in the States and doing it abroad is ALL THE BOOBS. Unless I missed the Disney mural with Minnie in g-string and pasties, I'm pretty sure we wandered into something that might not fly in the United States. 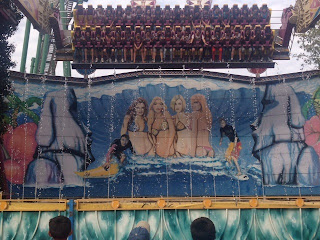 Okay, so there were butts, too. And a one-eyed girl and bizarre shooting water in your face symbolism.

To be honest, the only thing I don't really understand is the connection all of this might have to the Easter Island heads. Although, they do seem to be appreciating all the boobs.

Most of the rest of the day was kind of boobless until the last ride. 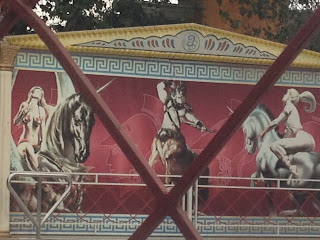 It was the spinning.

Everything was fine until the end of the ride with the scary bottomless-on-a-horse imagery. Right after the pleasant spinning and the lovely view of the Andes from the top of the ride, right to the bottom when you think it's all over, the ride spins you at light speed in circles of flashing light until any plans you had for the rest of the night are lost in a haze of nausea.

Thus, my lack of a post for that night.

The next night was lost in a blur of stomach bug, probably contracted from overexposure to poorly drawn boobs.