When friends hear that I've moved to Santiago, one of of the first questions asked by friends who are familiar with Chile is whether or not we've been to a cafe con piernas. (I know there's an accent there, but my keyboard won't seem to put it there.) This translates as coffee with legs, so you might think you know where this is going. I thought I knew, and I was wrong on so many levels.

It's important to know that Chile is considered to be relatively conservative by Latin standards. That doesn't mean I didn't have to try to distract my 11-year-old's eyes away from the television screen while we waited to file paperwork in the social security office because about ten busty women in thongs and feathers were shaking what they had on a morning show. But, it was Carnivale time, so I guess booby fever was in the air.

ANYWAY, I spent six months with almost no ideas about cafe con piernas. I didn't even think about it unless someone asked, and then I'd just kind of write it off. I saw Samantha Brown's Santiago episode, so I had an idea that these cafes were like the ones we went to in Rome, where there are no chairs, you just down your espresso and go, except for the fact that the waitresses would be wearing short skirts and heels. Honestly, this is Santiago, so you don't have to go downtown to a special cafe to see short skirts and heels. The other day I saw a baby in a short skirt and heels, and she was smoking, but that's another post.

When Rob's mom visited, we were downtown walking between the Mercado Central and Plaza de Armas. It was about 47,000 degrees celcius, so when I saw Cafe Haiti, we popped in because nothing cools you down like a shot of espresso. 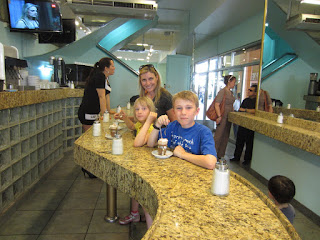 It could have been Denny's, if Denny's only served coffee and cocoa. And if Denny's were impossible shiny and had no chairs or tables. And if your moderately attractive, very maternal Denny's waitress got part of her skirt caught in the slicer and had to finish her shift with half a skirt.

It took about ten minutes to have our coffees, cocoas for the kids, and water. The waitress was sweet to my kids and tried to talk to them in Spanish, even though the first thing my daughter says to anyone Chilean is, "No hablo espanol." I'm trying to teach her, and I thought the extra exposure to the language over our vacation would soften her attitude about learning, but she's still relying on me.

So, I wondered why, if the whole experience was so lackluster, why people kept asking me about it. I googled it and found this. 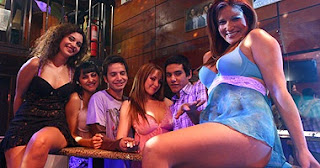 Some cafes are bikini cafes. Others feature lingerie.  I just happened to wander into the most boring sterile
cafe con piernas ever.  These folks found something completely different.

I was under the impression when we went into Cafe Haiti that I would then be able to report back to friends that I had, indeed, experienced this cultural phenomenon, but I guess I found the lamest version ever. If I see a racier one and I'm with Rob and without the kids, I'll go in, just to satisfy their curiosity. Not mine, of course. I know Rob will be terribly disappointed.